In Aziz Malik’s well-known book ‘Pothohar’, it is written that ‘we can call it a guard post more than a fort because it has only two gates.

One gate opens to the east and the other to the west, it was built slightly higher to keep an eye on the surrounding population.

Apart from this, the mail carriers in different parts of the country used to stop at this post to change horses. 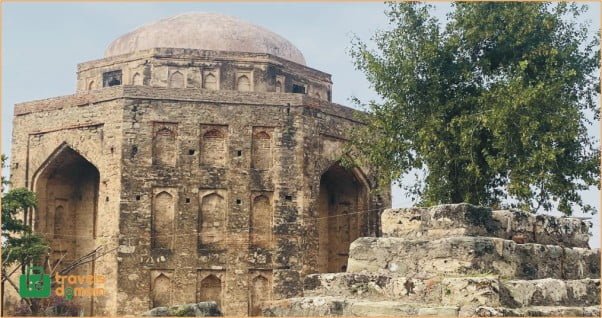 The town of Rawat, 25 km from Islamabad, is said to have its origin in the Arabic word Rabat, which means safe place. There is also a city of the same name in Morocco.

Islamabad has outgrown the sprawling tradition, so in the years to come it will be called the Sarai or Qila of Islamabad.

Its walls were raised to a height of thirty feet, a few residential houses were also built for the soldiers as a mosque.

There is also a beautiful and spacious Islamic-style Diwan Khana in the middle.

Rawat Fort Was Built By! 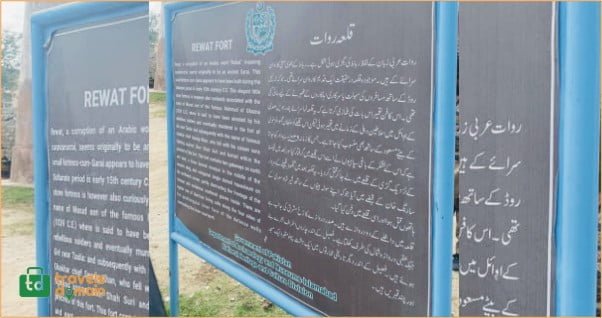 There is no mention in the history of when this fort was built.

However, in the information book on the entrance of the fort, it is recorded that this fort was built by Sultan Mahmud Ghaznavi’s son Masood, which dates back to 1039.

who was later captured in the same fort by his rebel soldiers who marched him to the fort of Garhi near Taxila and killed him? Later this fort came under the possession of the Gakhar tribe.

The Rawalpindi Gazetteer of 1910 records that ‘the influence of the Gakhdars lay between the river Jhelum in the east and the Margalla pass in the north, Khedi Murt in the west and part of the Jhelum district in the south. 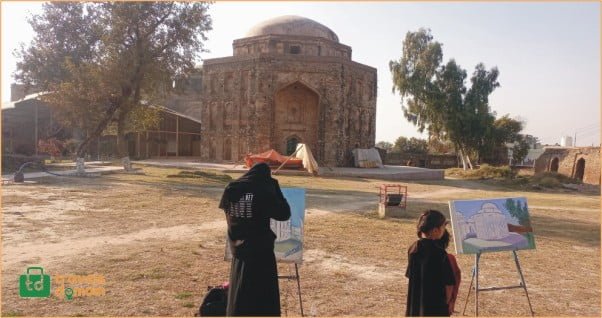 Three forts of Gakhdar were famous in this area. One is Dangali with Dadyal Azad Kashmir, the other is Phirwala and the third is Rawat. Who were these Ghakhars and where did they come from?

Various traditions are narrated about them in history. The Gakhdars themselves claim to be of Persian origin and descendants of Sultan Kaid bin Gohar or Kegohar, who was a resident of Kayan in Isfahan.

While according to Tarikh-e Ferishta, the Gakhdas accepted Islam in the thirteenth century and they have been settled in Punjab since 682.

According to one tradition, the fierce enemy of Raja Risalu of Sialkot, Raja Hudi (who holds the status of a hero in the folk traditions of Punjab) was also a Gakhar.

One of the traditions of the same gazetteer is as follows: “Gakhars are the descendants of a Persian king, Jared, after the defeat and death of this king, they had to leave their region and go to China.”

Where their leader Feroze Shah along with his companions took up employment as the Emperor’s bodyguard.

From there he went to Tibet and converted to Islam at the beginning of the 7th century, later he came to India with Mahmud Ghaznavi.

Perhaps during this time, they were settled in this area in terms of geographical importance. Because the construction of Phirwala fort is also described between 1012 and 1018.

It is recorded on page 64 of the Rawalpindi Gazetteer that in 1205 the Gakhdas were defeated by Shahabuddin Ghori and forced to convert to Islam.

Later, when the same Shahabuddin Ghori was returning from India, a group of goons broke into his tent and killed him.

According to a local researcher, Habib Gohar, the soldiers of Sultan Masood Ghaznavi mutinied while crossing the Indus River.

According to contemporary Arab historians, the fort was closed in Rabat Margala.

In Tarikh Ferishta, the name of the river was mistakenly written as Jhelum instead of Indus.

Since no traces of Rabat Margala were found between the Indus River and Jhelum, Sarai Rawat itself was assumed to be Rabat Margala.

The Arabic word Rabat Sarab is charming in the country row of unpaved inns like Sarai Raju, Sarai Khurboza, Sarai Kala, Sarai Khola and Sarai Begum along the Jarneli road.

The reason for the popularity of the word Rabat is due to the writings of Gukhara historians Dani Chand and Brij Nath. The first mention of Ravat in history is found in the commentary of the Italian priest Monserrat.

According to this, in 1581, Akbar’s army camped at ‘Ravandam’ after Mankiala.

It has been translated by Dr. Mubarak Ali into ‘Akbar Ka Hindustan’. Two more travelogues also mention this place.

Jean-Baptiste Tourner, a French gym merchant, described the inn as ‘Rupat’ in his travelogue in 1650, and ‘Rawata’ by the seventeenth-century Bhutanese traveler Tagus Ras Pa.

Gakhar Sardar Sarang Khan is buried in Qila Rawat along with his sixteen sons.

They were killed in a bloody battle which is described in ‘Wadi Pothohar’ by Rashid Nisar 1997.

But as Sarang Khan had promised Humayun help, he sent the envoy two lion cubs and a quiver full of arrows, which meant that he was ready to fight Sher Shah.

Sher Shah Suri was very angry at this and attacked the Ghakhars. This battle took place in 1542 at Rawat, which was then called Rabat Sarai.

Sultan Sarang and his army were not only defeated but he was killed along with 16 of his sons.

But Sher Shah ordered the construction of a fort in Rohtas in view of the future revolt of the Gakhdars.

When Sultan Adam Khan became the ruler of Potohar after Sultan Sarang Khan, he built a tomb in his brother’s memory at Rabat Sarai.

Which is still standing safely in this fort, but it is surprising that the graves are kept outside the mausoleum.

No reason for this is yet understood because all the tombs of this style in Punjab and Sindh have graves inside, but this is the only tomb without any name or sign of any grave inside.

The Gakhdars were apparently defeated at Rawat, but when Humayun re-entered India with the military support of the Shah of Iran, he crossed the Indus River and settled in the fort of the Gakhrads, Phirwala.

Here he was accompanied by Prince Akbar, fourteen years old at that time.

The Ghakhars helped Humayun to the fullest extent and brought back his lost kingdom.

When Akbar became the king, he gave Sultan Kamal Khan, son of Sultan Sarang Khan, the title of Panj Hazari in the Mughal army along with the territory of Potohar.

Rajmohan Gandhi in his book ‘Punjab’. On page 139 of A History from Aurangzeb to Mountbatten, he writes: “Gakhar Sardar Makrab Khan supported the Iranian invader Nadir Shah against the Mughals in 1739. Nader Shah gave him the title of Nawab.

Muqrab Khan defeated the Yusufzai and Khattak tribes in the west and expanded his state from Sindh to Chenab.

Later, Muqrab Khan could not withstand the growing power of the Sikhs and was killed in Gujarat in 1765 by Gujar Singh of Bhangi Masal.

After which the Sikhs made this fort a ruin. With this, the sun of seven and a half hundred years of rule of the Ghakhas over Potohar has set.

The fort was handed over to the Department of Archeology in 1955. Today, the restoration work of this historical fort is going on with the support of UNESCO.

The fort of Rawat and the area’s forts have changed the course of Indian history at many points.

Humayun was able to regain his throne thanks to their help.

Shahabuddin Ghori was killed by the Ghakhars.

If Nadir Shah had not received the help of the Ghakhars in the battle of Karnal against the Mughals, the history of later India would have been very different.

But today’s history has forgotten the Ghakhas and their place in history.

Great warriors, generals, and conquerors are buried in the pages of history.

Where the capital of Pakistan is located today was once the stronghold of the Gakhar chiefs.

When their horses raced between the Indus River and the Jhelum River, the great conquerors of history trembled with the awe of their horses.

(This article is extracted from a piece by Sajjad Azhar)